Living in Japan as a Japanese native and as a foreigner are two very different experiences. A great example of this; in Japan people tend to be more indirect and shy, which means that as a foreigner in order to succeed, you are almost required to take charge. Many different contradictions such as this exists.

Should you move to Japan?

If you are somebody who is driven to put themselves in a potentially challenging and socially-isolating environment, moving to Japan will be one of the best decisions you have ever made. Japanese culture tends to exacerbate any shortcoming we have as people, and forced us to improve on them.

Because living in Japan in entirely what you make it. If you are a likable, open, and friendly person, it will be very possible to make friends in Japan. You stand out, and you will be able to take advantage of that on a minute-to-minute basis. On the other hand, people who move to Japan who are more pessimistic may come to realize that they ‘hold all of the cards’ in their relationships, so to speak. So much of the outcome of whether or not you will have a great life in Japan or not depends on your ability to make the most of every situation. This is a process of seizing every opportunity, overcoming fear, and coming to see failure as both a motivator and opportunity.

So much of life in Japan is about coming out of your shell and facing your fears. I think many introverts relate to Japanese culture, where people tend to be more soft-spoken and indirect, but quickly realize after moving here that if they want to get anywhere with life in Japan, they need to make everything happen by themselves. In Japan, most people are afraid to approach you, and things generally get much more fun when you take charge and take it as your role to make the people around you feel as comfortable with you as possible.

You can read more about this social dynamic between foreigners and native Japanese residents through some of the later paragraphs in another one of my articles below where I go over my personal experience studying at a Japanese university;

There are many reasons why this dynamic can be difficult for foreigners to adjust to. In particular those who spent their lives as the ethnic majority of their country will probably not be used to having to break into a system that was designed well without their situation in mind. So many times in Japan there just…won’t exist any option for somebody with a foreign passport or to accomplish some goal, unless you can really finagle your way through some pretty complex situations.

I can’t begin to explain how many issues I have had creating credit cards, accounts over various different websites, and doing things as simple as registering for a bank account all because I have a middle name, and there is no space to enter your middle name on a website, but all of your documents must match your bank account which I was forced to match with the name on my US passport, so you need to send in the application again but explain the situation over the phone to somebody who is terrified because they’re talking to a foreigner, and then. And then…and then… *head explodes*

The reality of all of these systems in Japan, be it bureaucratic, academic, work-related or social, are not designed for foreigners in mind. The population of Japan is still 98% ‘pure’ Japanese, and so whether or not you can make it and be happy here becomes a sometimes-brutal reflection of your own insecurities, fears, and missed opportunities. In a country where people will never speak to you first, never reach out to you first, and in a society where spontaneity and unpredictability are largely unvalued, it can be an almost overwhelming amount of pressure to ‘take the reigns’ so-to-speak here, and try to carve out the kind of life you are aiming for. If you are okay with working within this system, and not expecting things to be laid out for you, things have a tendency to work themselves out. I will also say that the employees at immigration and across most institutions in Japan are generally really helpful, and will work with you if you can speak Japanese.

When and why I moved to Japan

In 2015 I moved to Japan to enroll in a Japanese language school. I moved here because I had enrolled in a University in early 2013, and was exposed to a multitude of different cultures so intensely and inescapably that I saw challenging life abroad as the next step in my journey. I moved here because of all the Japanese friends I made. I moved here because of the girl I was dating at the time, and all of the time I had spent invested in learning about the culture and language. But really, I moved here because of the potential growth I saw in myself. To learn another language and culture, to truly immerse oneself in an entirely different mode of being and viewpoint of the world; this is something that I wanted to be able to look back on my life and say that I had done. That I had faced the odds and adversity, and still overcame it to become a positive and happy member of an entirely different society than the one I had grown up in. I moved here in 2015 to learn Japanese in Japan, but I also moved here to expand my horizons, discover what was ‘out there’, and see what kind of person I could become. It was the ultimate challenge, and I’m really happy that I choose to move here, even though it can be very, very difficult at times.

How moving to Japan has changed my perspective on complicated issues, and the way I live my life

In Japan there is this concept of shoganai, meaning that there is no use getting upset over a subject if becoming emotional about an issue if your emotions don’t result in any meaningful change or improvement. This concept permeates ever corner of life in Japan, perhaps even to point of fault. There is an upside to shoganai culture, and there is also a fine line between saying shoganai with the intent of controlling one’s emotions, and saying shoganai with the ulterior motive of turning a blind eye to difficult issues out of convenience. This was the exact opposite of what I was confronted with growing up in The United States, and countless cultural aspects such as this were truly eye-opening experiences.

Since moving to Japan, I have trained myself to try to tackle every issue, every debate and fight with a more ‘grey’ mindset. People in Japan tend to have very balanced opinions towards the majority of topics, which is great but can also have some negative side-effects. People (especially the younger generations) tend to be nearly indifferent to political issues, to the point where they think that it literally has “no connection to me”. When comparing the US and Japan, both of these viewpoints exist on the opposite end of a spectrum of which I would like to strive to exist comfortable in the middle of. Whether a stereotypical Japanese or American outlook on the world, neither of these viewpoints are particularly ideal, and certainly neither are particularly healthy. Japan was able to give me an important perspective on a nearly opposite attitude to much of what I was exposed through during my experience in the American education system, I allowed for me to form a more well-rounded worldview that is aimed at existing comfortably in the middle of many contrasting frames of thought.

Why I am writing about this, and why it is something you should consider if you are thinking of moving to Japan

I think that many people (possibly me included) come to Japan initially in an often dubbed “honeymoon phase” with Japanese culture. Fed up with the singlemindedness of our own societies, upon discovering an entirely different perspective on things through a society that functions arguably better than our own home countries, I think a lot of people develop a sort of mental “gotcha!” complex towards many of the problems they have been facing in their lives.

The point of all of this, is that Japan is a great country, and I love living here. I’m happy I moved to Japan, and I can recommend for you to move here too. But instead of creating a list of all of the reasons I love Japan, how much I love the food, how beautiful and other-worldly many of the scenic spots are here, I wanted to get deep, and deep straight to the core of how many people are probably feeling when they decide to move to Japan. Moving to Japan can not give you a hard reset on life. All of your shortcomings, fears, and insecurities, these are all things that you will carry with you onto that initial flight. What moving here will do, and this is the thing that has kept me going over the past seven years, is make is incredibly apparent where your shortcomings lie, but also give you direct feedback through your daily interactions as to how you can overcome these shortcomings. In short, it provides you with an opportunity, to look inward and become a much stronger version of yourself, which has been a really great experience. As I have written above, nearly every interaction, apartment search, job search, friends you make, your ability to learn Japanese, on and on and on… these things are all entirely in your hands.

So, if you are thinking of moving to Japan, I want you to ask yourself; “How far am I willing to go?”, and “Am I ready to truly take responsibility 100% for the outcome of everything in my life?”

Life can be brutal here, but it can also be really fun, and more importantly, really rewarding. If you are looking for an adventure and meaning in my your life, I so no reason why you shouldn’t move to Japan and join us all here.

If you are interested in moving to Japan, you are probably interested in learning Japanese. If you would like to know about my exact experience studying Japanese, please check out the articles below. I will walk you through the first steps you need to take to start making progress in becoming fluent.

The next step for you to start learning Japanese

You can read more about why I recommend Genki 1, as well as how to get started learning how to write Japanese at the below article “Which Japanese Alphabet Should you Learn First? A Beginner’s Guide”

If you are interested in hearing about my experience entering a Japanese language school when I first moved to Japan in early 2015, please check out the article below. 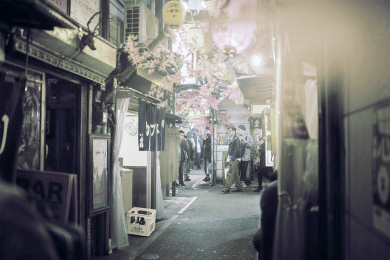